I feel slightly torn writing this blog; torn because this country of two million people is simply fantastic and if promoted in this light, tourists may descend in their droves. But on the other hand, boosting tourist numbers may be a way to turn around North Macedonia’s economy where the average salary is just $A13000.

It goes without saying then that I have loved our 11 days here. Travelling independently was easy, the sights, people and the slow approach to eating and drinking were brilliant.

Our first port of call was Skopje, capital of the newly named North Macedonia. Gone is the singular name Macedonia. A lengthy dispute with Greece whose northern most province is also called Macedonia forced the name change. Gone too, is the name Alexander the Great, again, courtesy of the Greeks who claim him as their own. So, Alexander the Great Airport is now Skopje International Airport, Alexander the Great Highway is now the Friendship Highway and the mighty statue of Alexander the Great in the Square is known as ‘Warrior on a Horse’. Yes, the stakes are high when you’re sweating on gaining admission to the NATO and EU Clubs.

Skopje is a city with remarkable history and architecture, settled as it was by Greeks, Romans and Ottomans. Five years ago though, as part of the government’s ‘Project 2014’, millions of denars were sunk into creating renaissance style buildings of mammoth proportions and commissioning a multitude of statues with the sole aim of luring tourists. The construction still continues.

To be honest, I liked the buildings and statues, but I understand where the locals are coming from with their criticism that the building frenzy is simply reckless spending. Essential services like health, education and employment have suffered, and in North Macedonia which is dubbed one of the poorest countries in Europe, every denar counts.

We arrived in this strong orthodox Christian country on Easter weekend. Brightly coloured eggs (boiled eggs) were everywhere. The Julian calendar dictates Easter and Christmas here; a change from our Gregorian calendar. 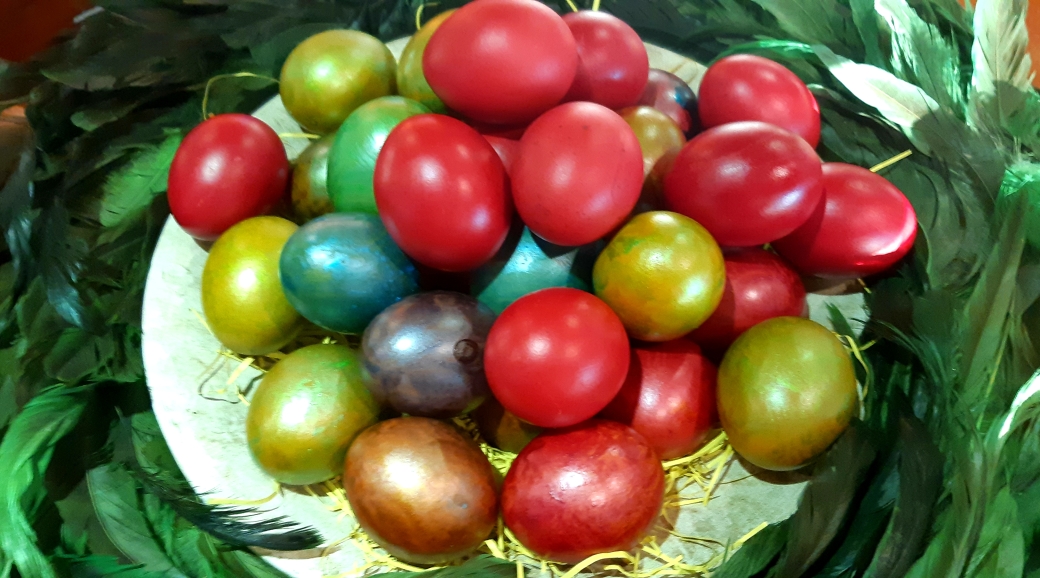 The old bazaar with its Ottoman influence was a fantastic place to spend time. It’s a twisting maze of shops, cafes, mosques, caravanserai and hotels. 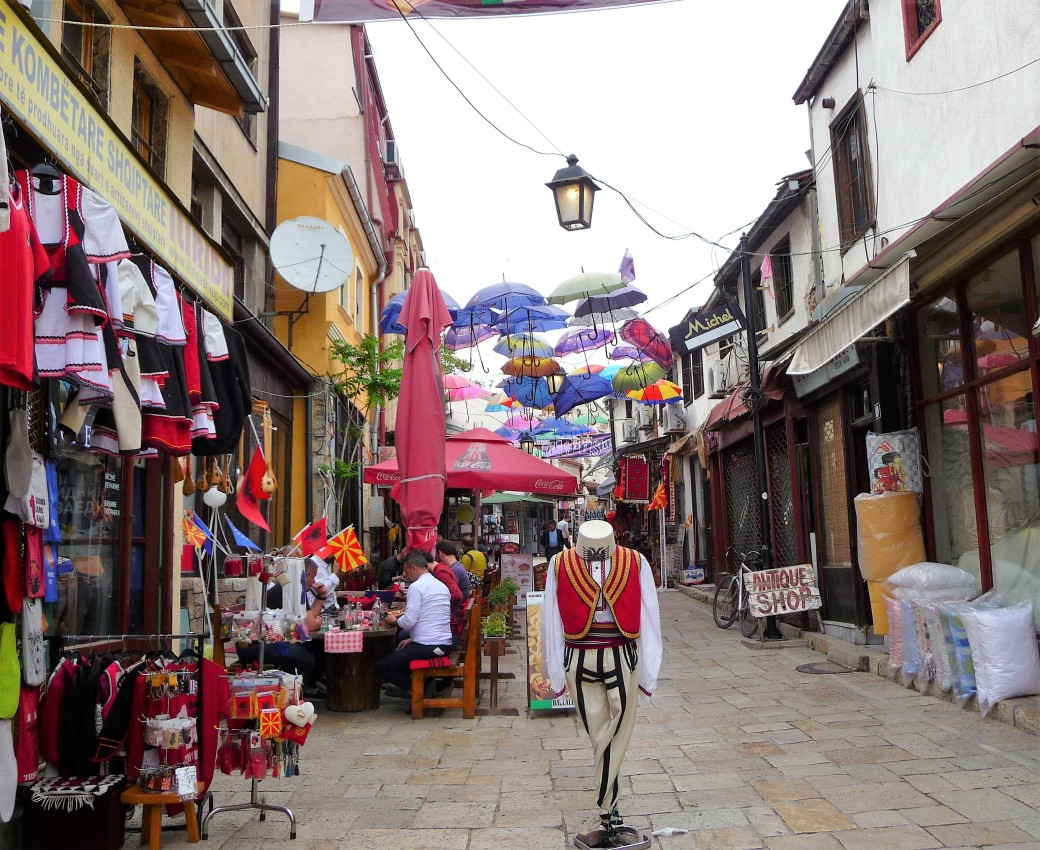 Away from the bazaar:

There are some excellent museums in Skopje. These photos are from the Archaeological Museum’s Trebenishte exhibition. Trebenishte was a 7th century ancient necropolis in Macedonia, discovered in 1918.

Another excellent museum was the Macedonian Struggle Museum. The black painted exhibit halls provided a stark insight into the resistance movement from Ottoman occupation of 500 years to Macedonia’s independence from Yugoslavia in 1991. It was a wonderful history lesson and your heart goes out to Macedonians who struggled for centuries to call their country their own. 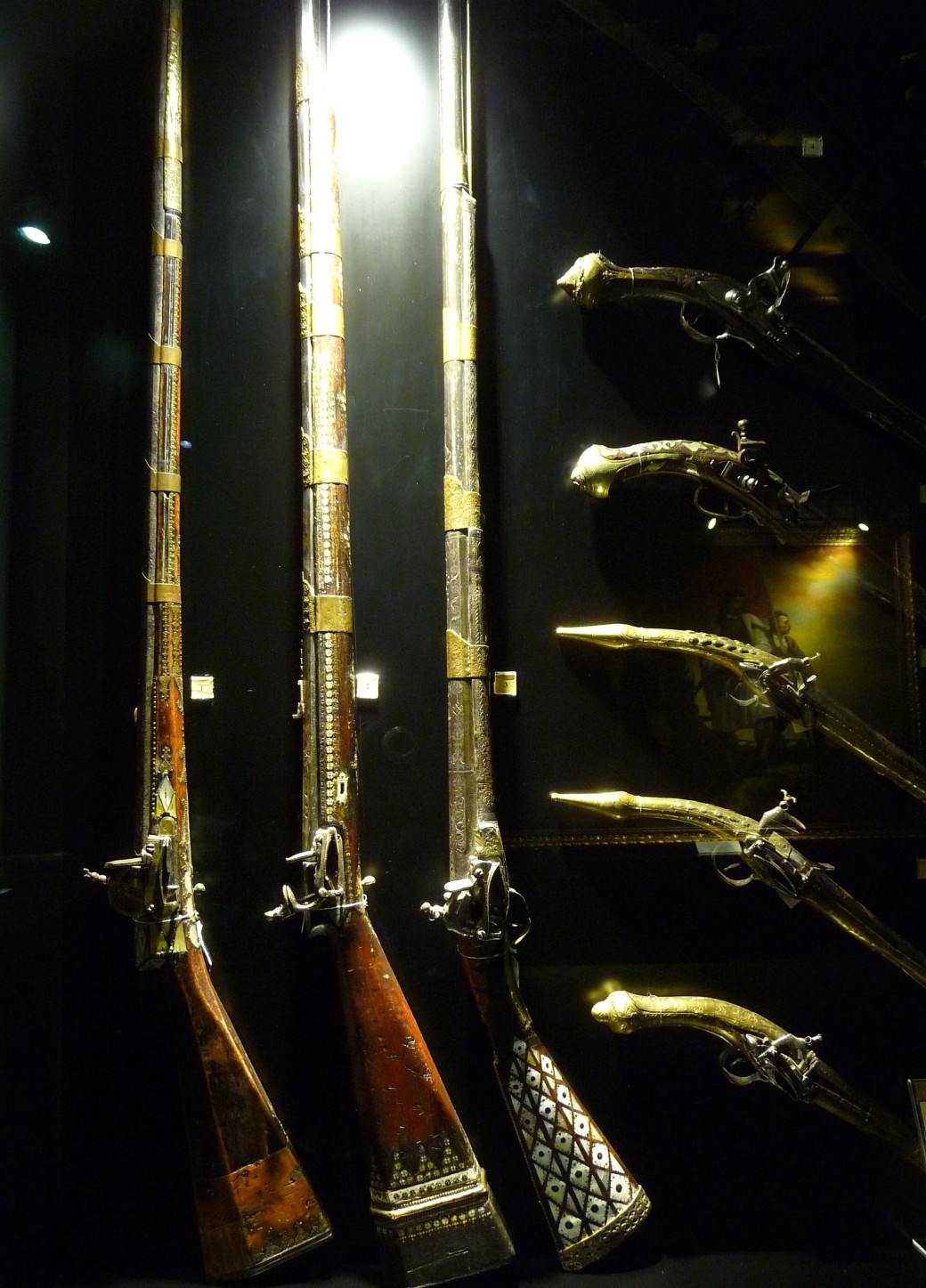 A few kilometres from Skopje is Matka Canyon. It’s nature at its best. There’s good walking tracks as well as a boat trip down the canyon that stops at a pretty amazing cave. 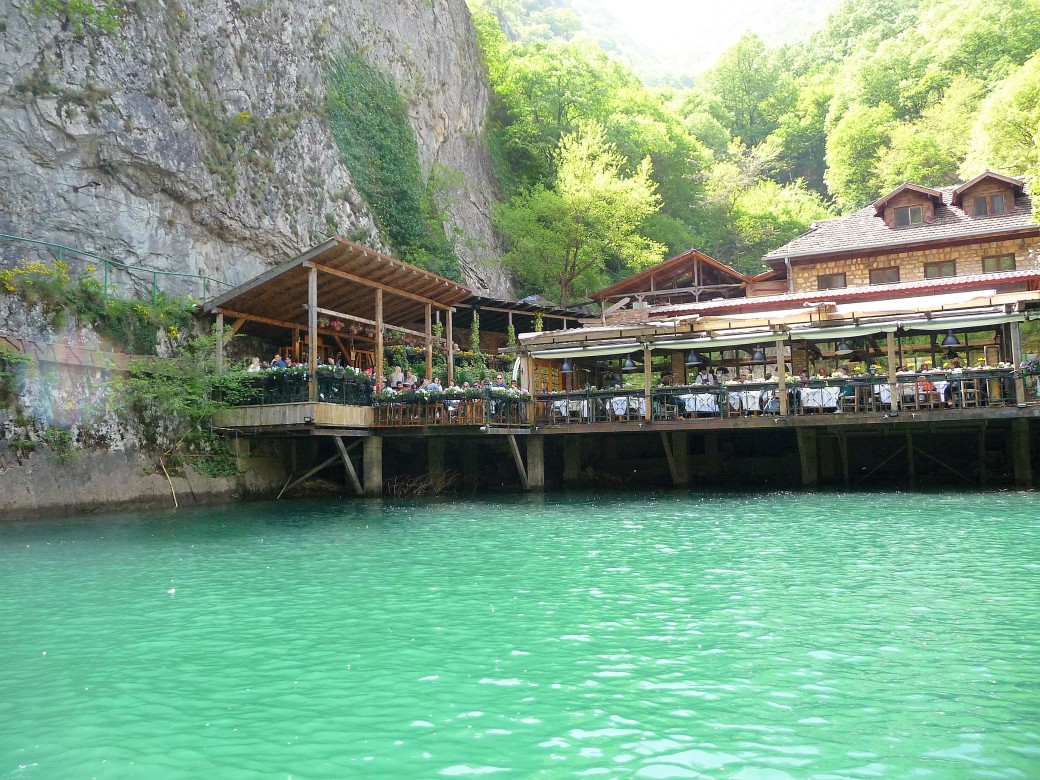 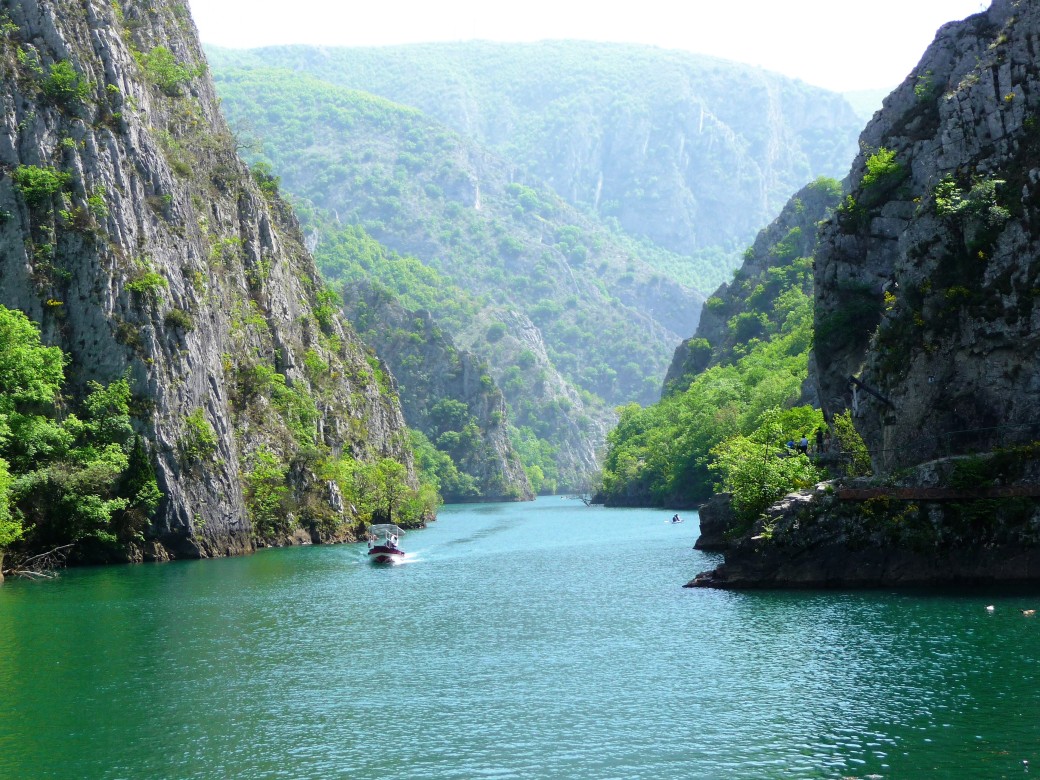 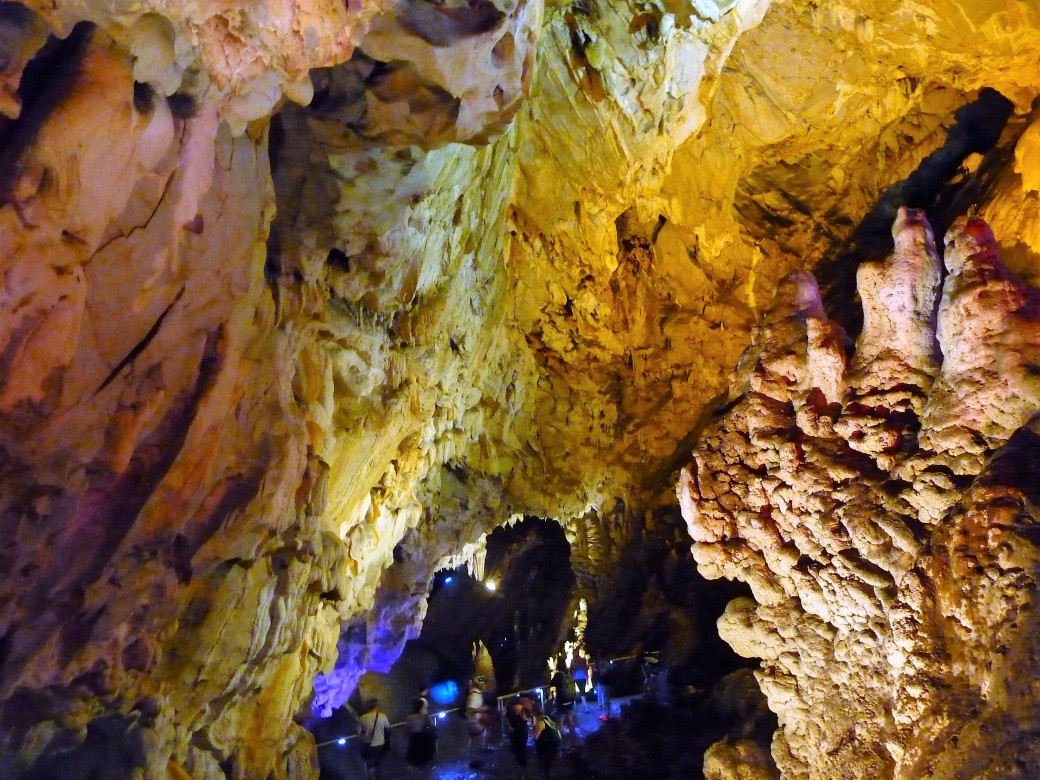 After 4 days in Skopje, we moved on to Popova Kula Winery in the Tikves wine region where all Macedonia’s wines are produced. We splashed out on a taxi for the one and a half hour drive, simply because the train left too early in the morning for me! We spent one night here in comfortable lodgings, sampled some fine wines and enjoyed dinner in the restaurant.

Bitola, Macedonia’s second largest city and just 14 kms from the Greek border, was our next stop and again, we hired a taxi for the two hour ride from Popova Kula. Taxis offer the most direct routes. Bitola was a fabulous city in which to spend 3 days. During Ottoman times, it was called the ‘City of Consuls’ since it boasted 13 European consulates – explains the affluence in the architecture of the buildings.

We also loved Sirok Sokak, a pedestrian street lined with cafes where locals promenaded throughout the day and night. 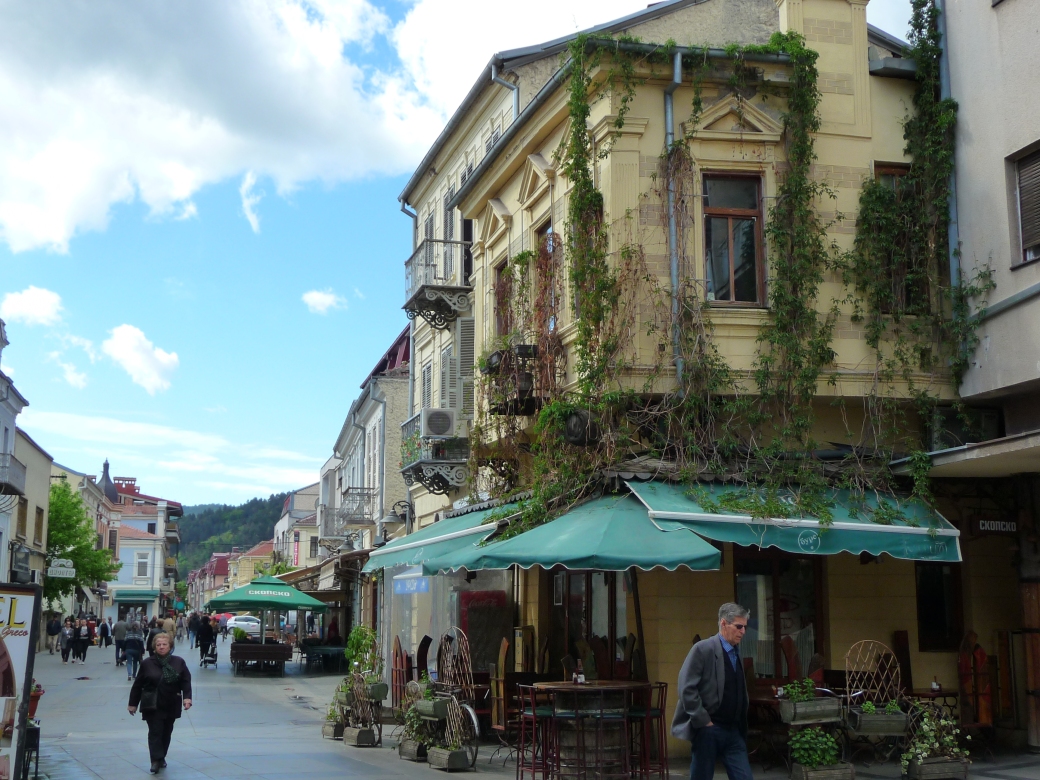 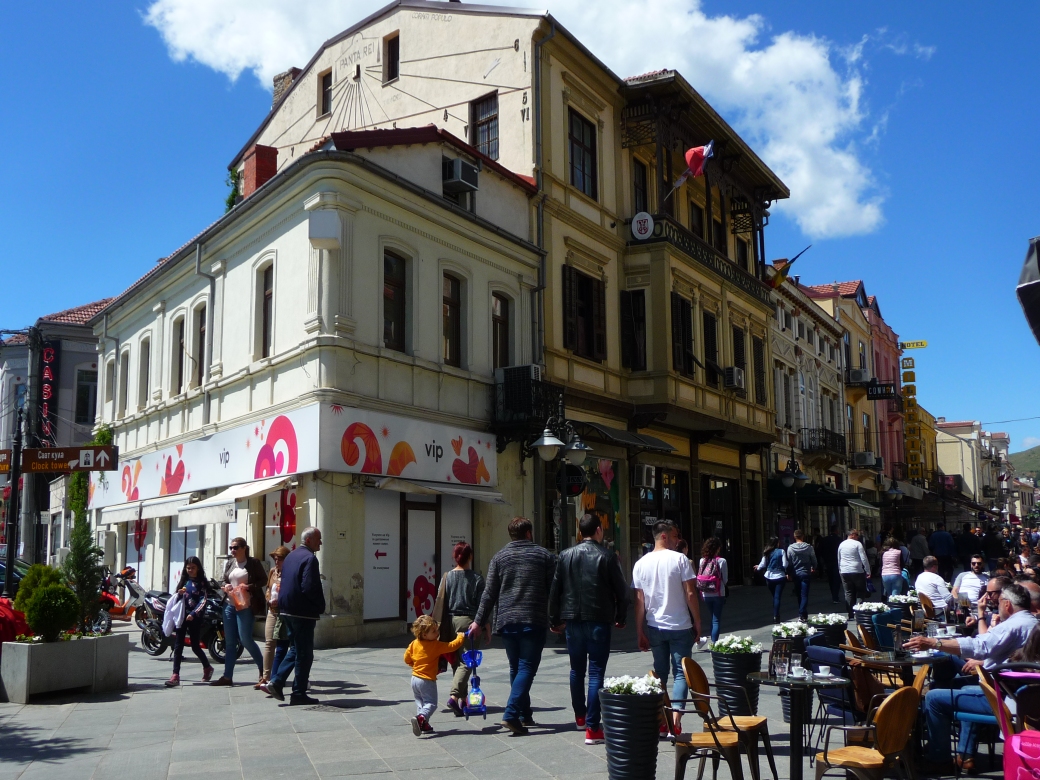 Bitola boasts a very good museum with some excellent exhibits. First, there is the exhibit honouring Ataturk, the man who ousted the Ottomans from Turkey and in the process, from the Balkan countries. 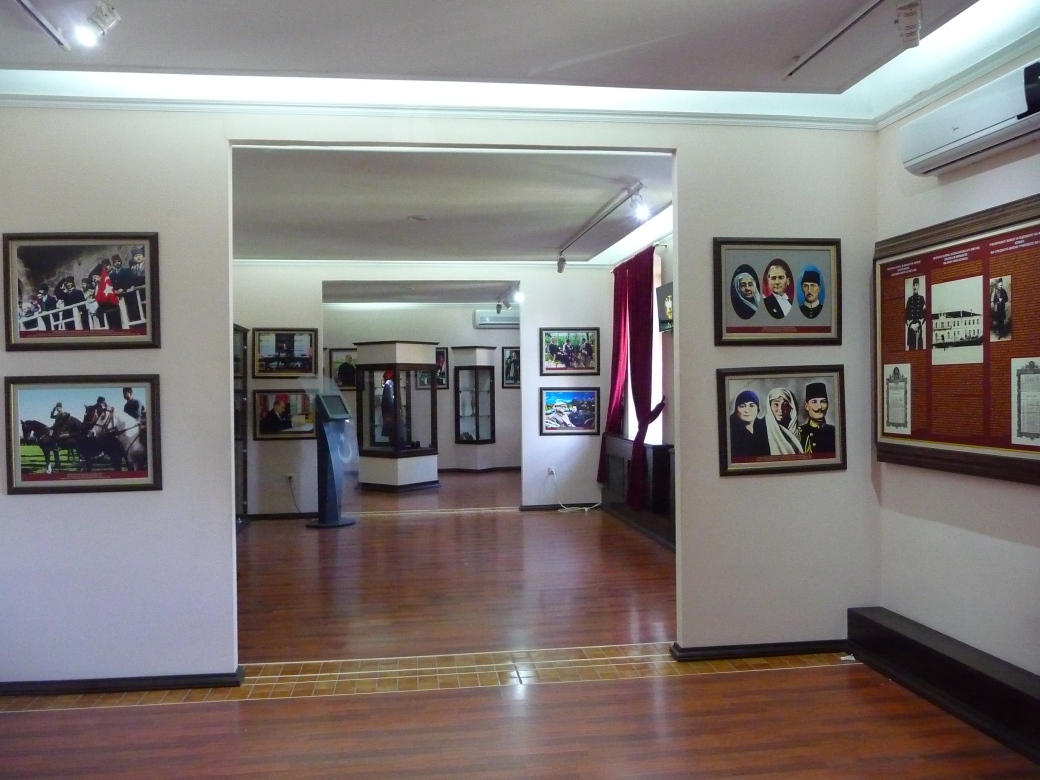 There’s also an art gallery within the museum and an interesting exhibit of Borislav Traikovski’s works. 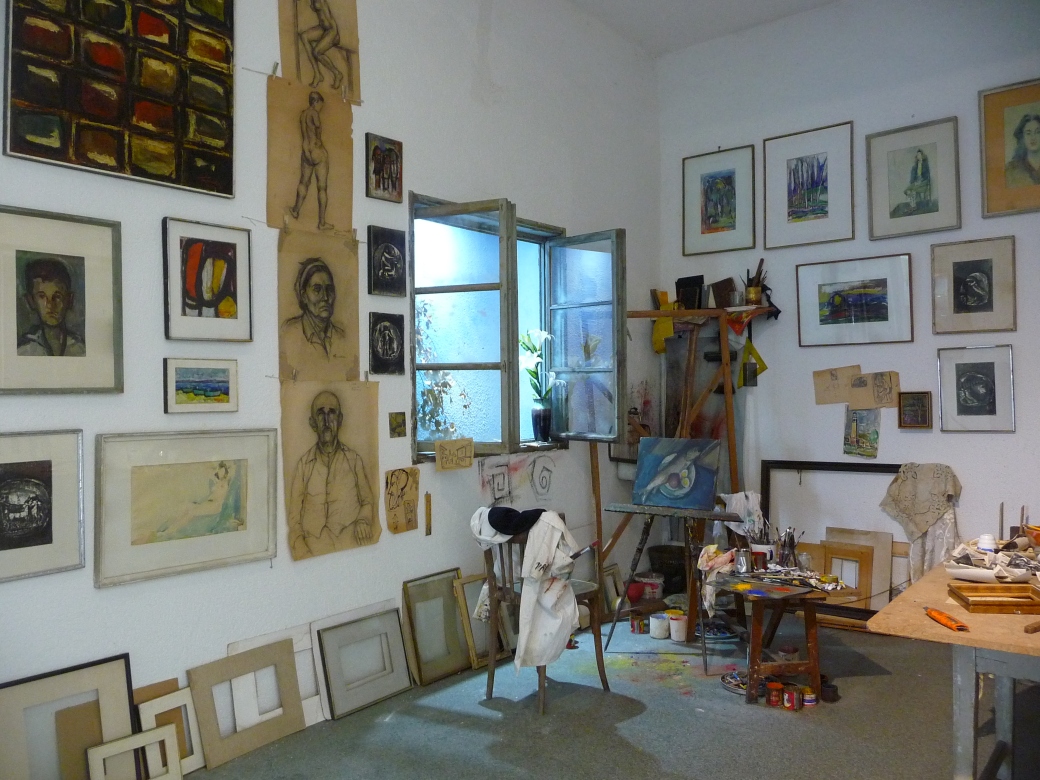 In addition, there’s an exhibit of Christian iconoclasts. 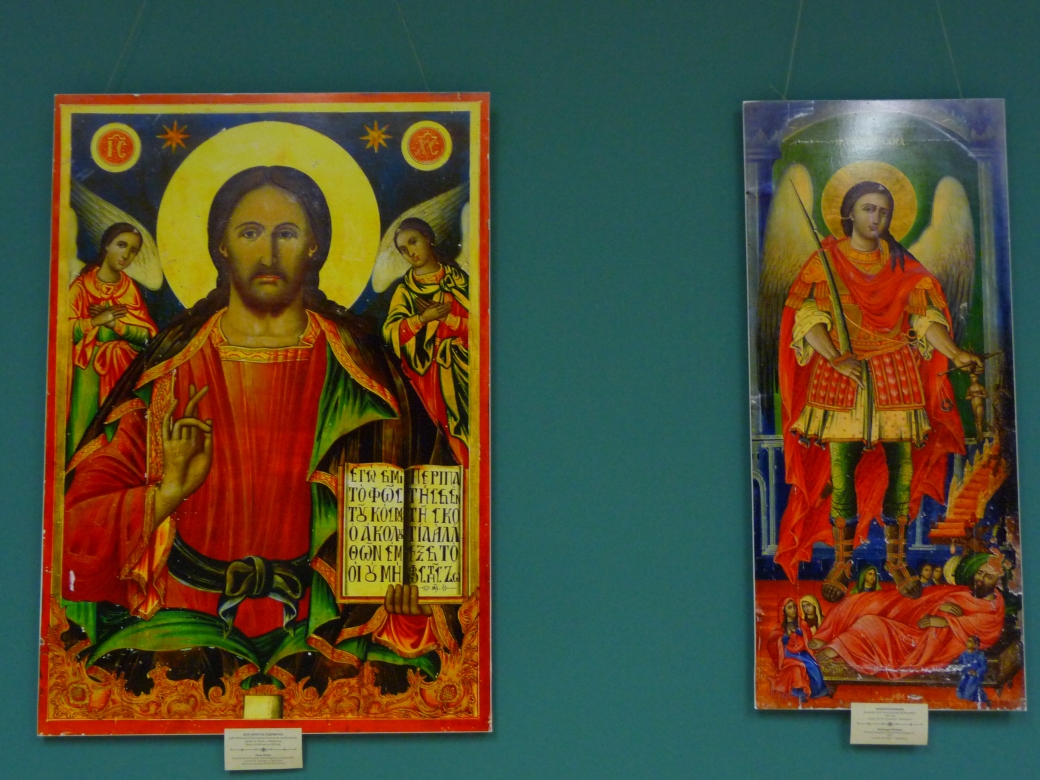 A short walk from Sirok Sokak is Heraklion Lyncestis, an ancient city built in the 4th century BC and Phillip II of Macedon’s abode. It’s impressive, particularly the mosaics, some of which are in tip top condition, given they date from 300 AD. We were given free rein to wander wherever we wanted, even crossing rickety boards to get to particular areas. 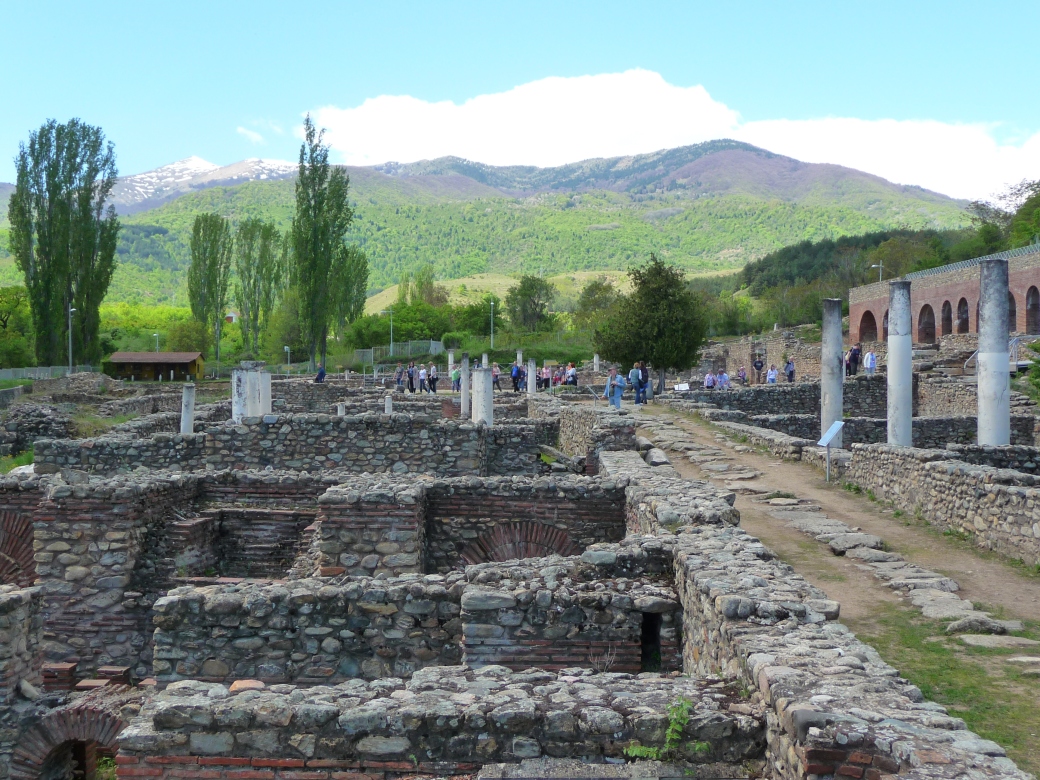 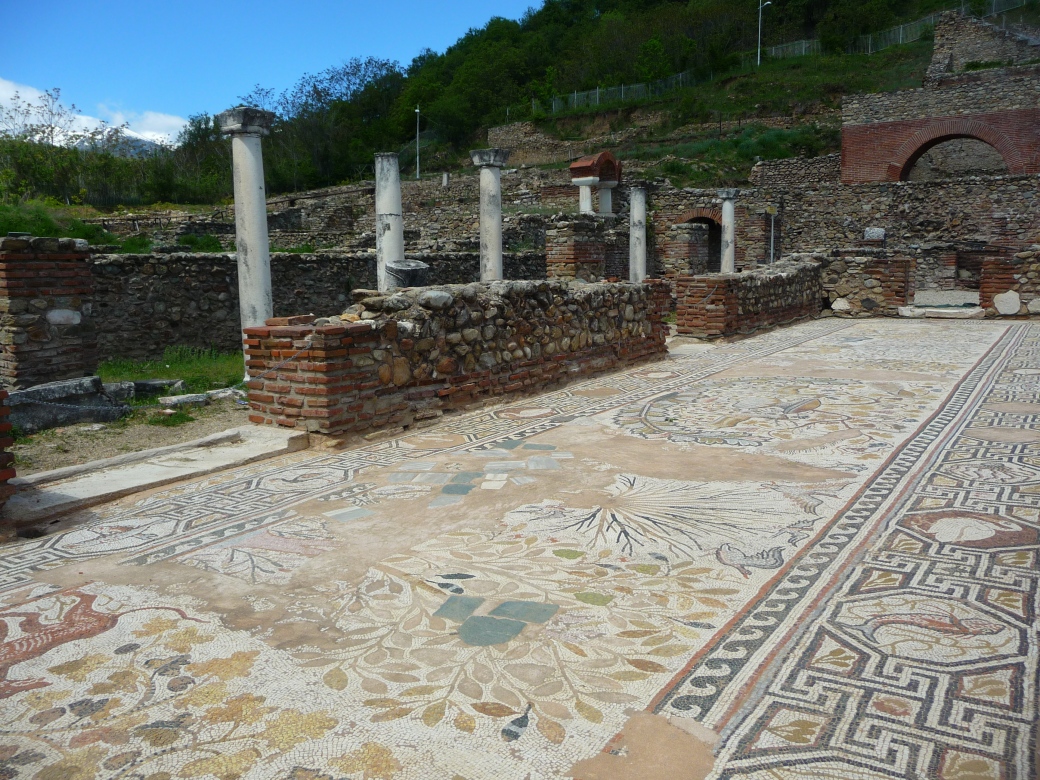 Pellister National Park, a 10 kms taxi ride from Bitola was well worth visiting. We hiked the World War I trail which was well marked and not difficult. Guide boards told the story of the Macedonian Front, which protected the villages around this area from German and Bulgarian attacks. Unfortunately, the Macedonians suffered great losses. This war and the next saw a number of Macedonians leave their country and settle in countries like Australia. 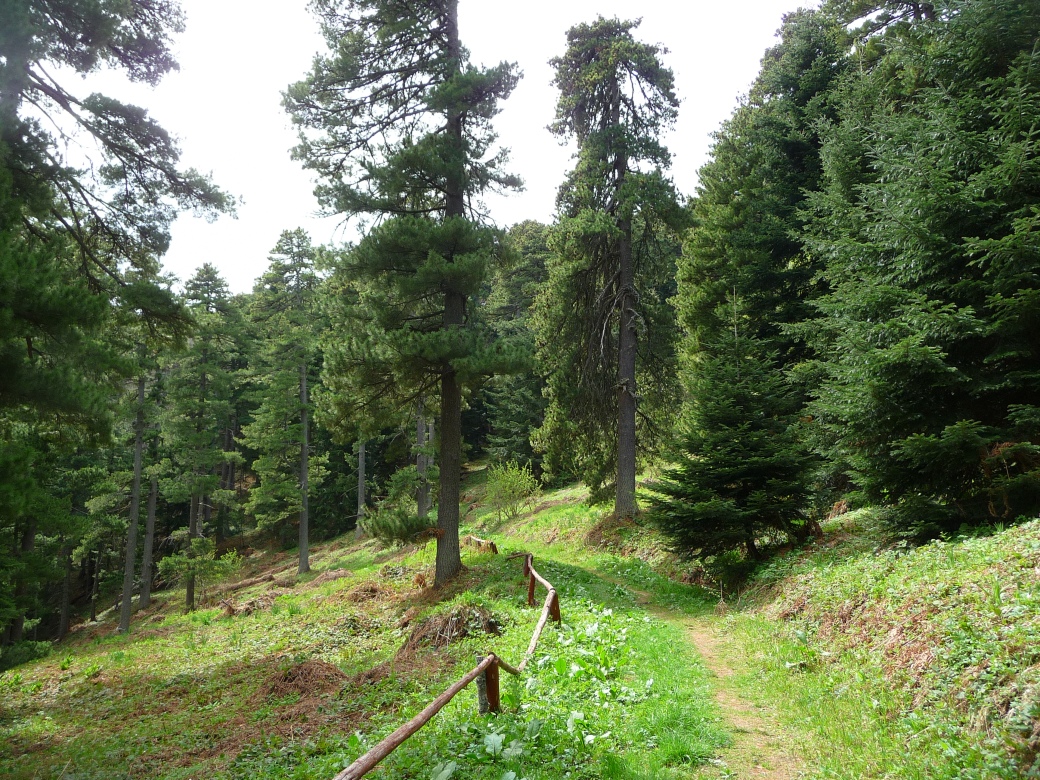 From Bitola we headed by bus for 2 hours to Lake Ohrid. We booked tickets a day before. There are 4 buses every day from Bitola to Ohrid. Lake Ohrid is landlocked North Macedonia’s answer to a holiday beach resort. The lake is large, extends to Albania and on its edge there’s a lively Old Town where Ottoman buildings, shops, beautiful churches, cobbled streets and cafes abound. I’d booked a lovely apartment with a balcony that looked out over St Sophia Church and the lake.

Travelling in Macedonia has been an extremely easy experience as well as a cheap experience. We paid $A30 for a very filling evening meal for 2 with a bottle of red wine. Another evening I ate spaghetti (lots of Italian eateries here) with a glass of red wine and finished with a coffee, all for $A6. Hotels are also well priced with comfortable accommodation for $A50-60. It’s a quieter part of the world to explore without the usual throng of tourists and we have thoroughly enjoyed it.

Tomorrow, we head over the border into Albania and from what I’ve read, it’s also relatively free from the tourist hordes. Will let you know.