Bangkok is a lay down misere. This teeming city of 14 million people definitely rates as a top place to visit and I couldn’t have picked a better place to start celebrating my recent, two years in the making retirement.

It’s been 28 years since I’ve visited Bangkok and memories dredged up from that visit are of a vibrant river scene, loads of temples and markets and really good street food. So good to see that these things are still in abundance. We opted for the Sheraton Royal Orchid where every room has a river view as does the pool.

The lengthy, fast flowing, muddy Chao Phraya River is the heart of Bangkok and it fairly hums with life. Boats in all shapes and sizes plough up, down and across the river carrying passengers and goods. We used the river for most of our transport, finding the river taxi far quicker than battling road traffic. Also, I’m partial to seeing a city from its river.

Chinatown still buzzes along, the food still good as it takes diners on an intentional journey through Asian cuisines, heavy on my favourite – chilli. Fuelled by good food, cold Chang beers, it was an easy thing to sit down amongst a sea of Europeans and pick up some great travel ideas. We did not hear a single Aussie accent in our five days in Bangkok!

We made our way down river to Asiatique which is a lively conglomeration of markets and food. Grabbed the chance to try something different. Certainly crunchy and apparently high in vitamins.

Bangkok’s notorious traffic problems are renowned, but the building of elevated roads, rail lines and walkways has gone some way to easing the congestion. Huge concrete blocks dominate the landscape. This pic was taken around Siam Square – home to a number of huge shopping malls that I enjoy wandering through. An odd admission from someone who is not a shopper.

We were lucky to be here on the weekend and took ourselves off to the weekend markets which are massive. These markets used to be located at the Grand Palace, but were moved to a bigger area, further out, but easily reached by Skytrain.

Bangkok’s klongs (canals) are finally getting their fair share of good press. The Thai government has embarked on a huge clean up program which will see more passenger boats ply the mostly man made canals and hopefully, less traffic on the roads. The canals fairly crackle with life from the many houses, shops and people that line the banks. Climb in and out carefully as you don’t want to fall into the murky waters given the clean up is still in its infancy. Apparently, the canals were once dumping grounds for everything, including refrigerators and lounges.

Rode in plenty of tuk tuks, although walking in this city is surprisingly easy. 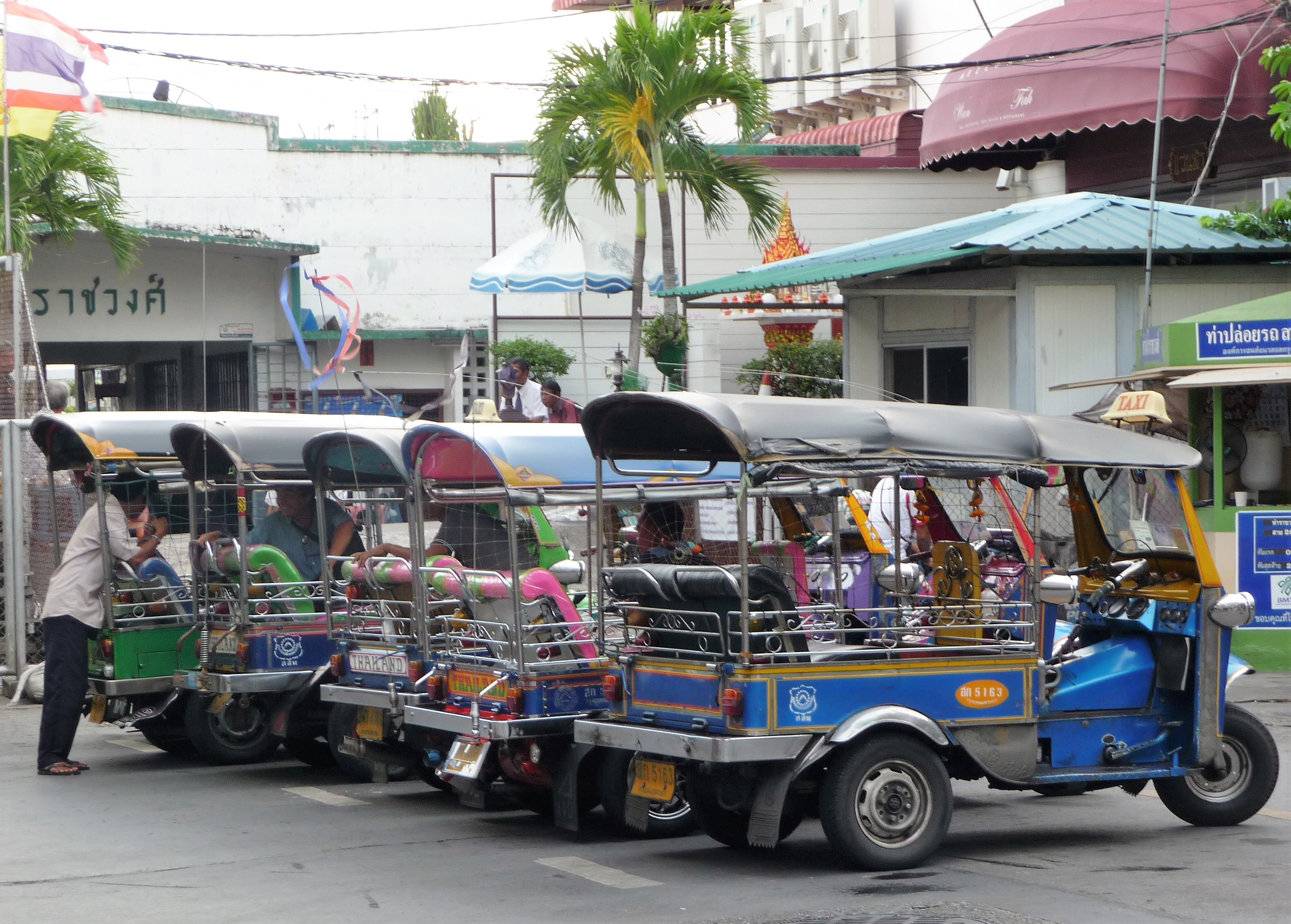 Rooftop bars are the way to go in Bangkok – the views at night are sensational.We took ourselves across the river to the Hilton Millenium and soaked up their views. Another night, we walked to the Lebua State Tower and had rooftop drinks in their famous ‘Hangover’ bar. Make a dinner reservation if you want to score a seat here, otherwise stand. Wear comfy shoes because you’ll be here for a bit – the views from 63 floors are to die for.

Khao San Rd, the famed backpackers’ area still has a good sprinkling of bars, cafes and guest houses. Surprisingly, we found it pretty sedate; quite possibly reflective of the Thai government’s approach to cleaning up their country. Many street food vendors are no longer on the streets throughout Bangkok and we’ve read that in holiday destinations like Phuket, illegally set up bars, cafes, beach chairs and umbrellas have been removed from the beaches. The aim of the clean up project is to return public land to the people. Easier flow of human and vehicular traffic has to be a winner too. Anyway, we made sure we enjoyed the easy going vibe of Khao San Rd.

We are in Thailand during the mourning month of October. The country’s grief at losing their beloved King in October last year is a shared grief and the build up to his funeral and cremation on October 26 is intense. Thais have lost their King of seven decades, a man who symbolised stability and honour.

The dress code here is very much black. A myriad of banners and posters of this respected man adorn buildings, rehearsals for the elaborate $90 million funeral are in full swing and purpose planted marigolds are blooming right on time. Australia will be represented by our GG Peter Cosgrove. One night as we were in a taxi, traffic was stopped for a considerable time as a number of royal and state cars made their way from a rehearsal at the Grand Palace (which is where the cremation will take place in specially constructed golden pavilions) to the current Palace. Understandably, the Grand Palace has been closed to the public for some time.

We’ll be in northern Thailand on the day of the funeral. Ceremonies are being conducted throughout Thailand.

Will finish with this quintessential BKK icon – never get tired of admiring the work that’s gone into creating this conglomeration. Yet, it functions.

We had a fabulous time in Bangkok. Today, we depart for Ranchanaburi – gateway to River Kwai and Hell Fire Pass.

Surer than surer that retired life is going to yield some incredible moments. Knowing when to leave is so important. The party, the relationship, the job.