Armenia is a green country and its majestic, grassy mountains with snow still on the summits captivated us from the start. This landlocked country hemmed in by Iran, Georgia, Azerbaijan, Turkey and the worrying de facto independent Nagorno-Karabakh Republic to the east is well and truly worth a visit.

We arrived in Armenia after a 3 hour taxi ride from Tabriz Iran. Our driver dropped us at the border where we exchanged our Iranian rial for Armenian dram and exited Iran by walking along the rather lengthy barbed wire border into Armenia. Here, we were treated to a warm welcome from Armenian immigration and after clearing customs, a couple of cold beers to celebrate the end of our month long alcohol detox. Australians will be interested to know that they no longer have to pay for a visa.

Our first night in Armenia was spent in the little village of Meghri, a five minute taxi ride from the border. It’s scenic with mountains forming a pretty backdrop to the 17th century village. 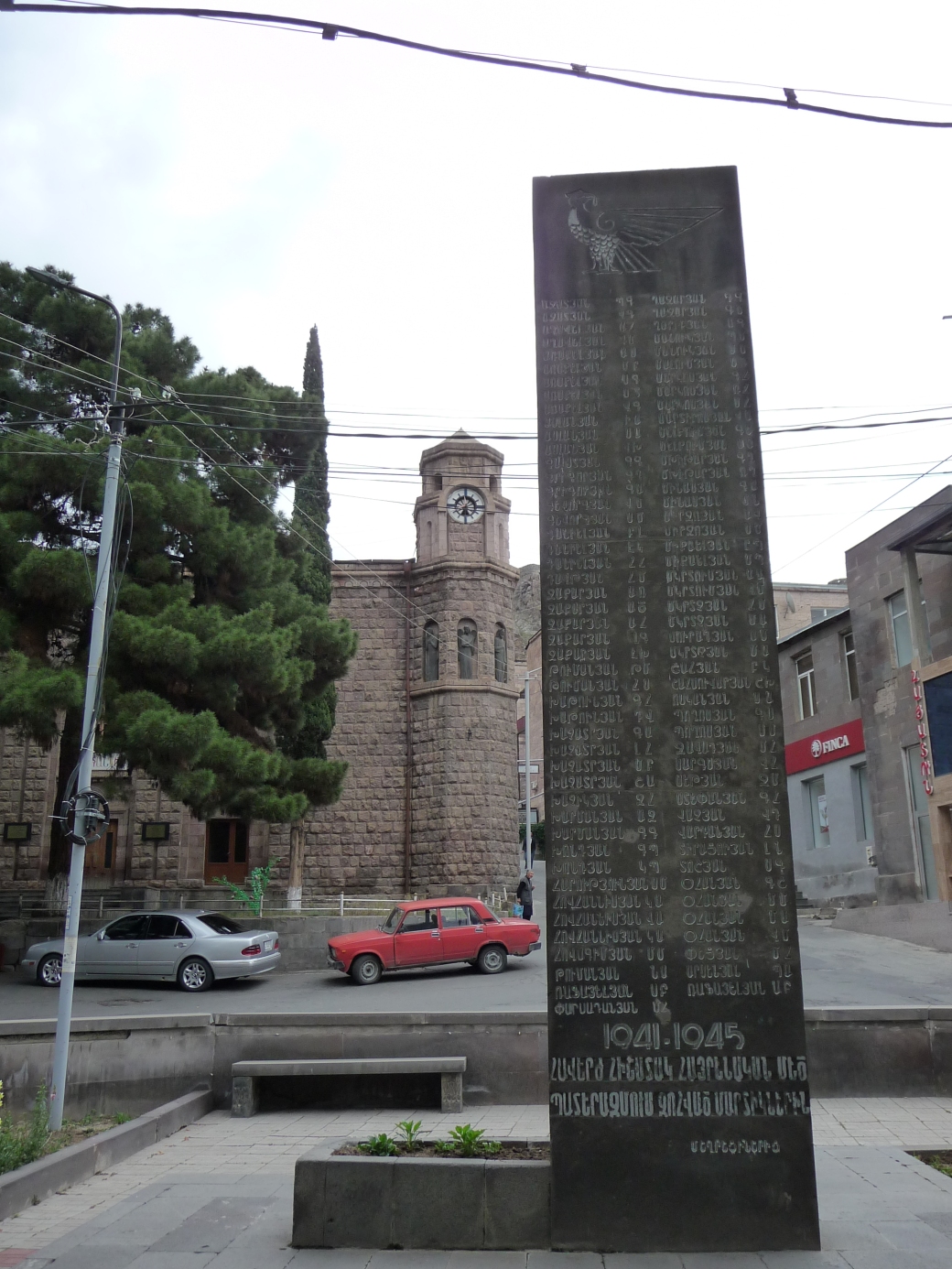 The white pipes in the photo below carry gas to households.

Booking.com works well in this country and I’d booked us into a family run bnb which turned out to be a good choice. Marietta is the matriarch of Haer bnb and she runs a very efficient 8 room guest house. We were fed and looked after beautifully. 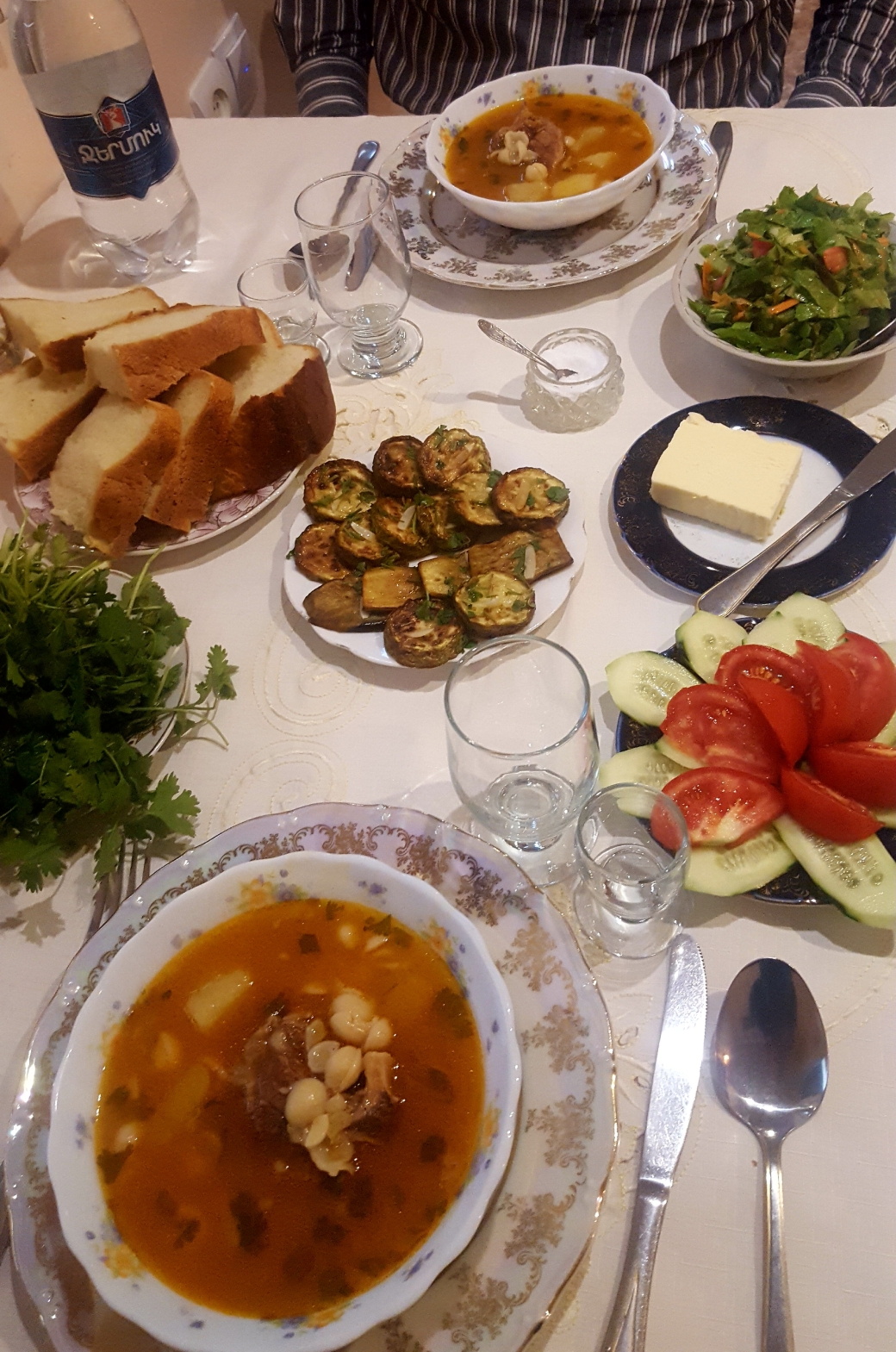 From Meghri we hired another driver for the 375 kms, 8 hr journey to Yerevan, the capital of Armenia and our base for 6 nights. The road which cut through the mountains was narrow, bumpy and very, very slow. But the views more than made up for this. 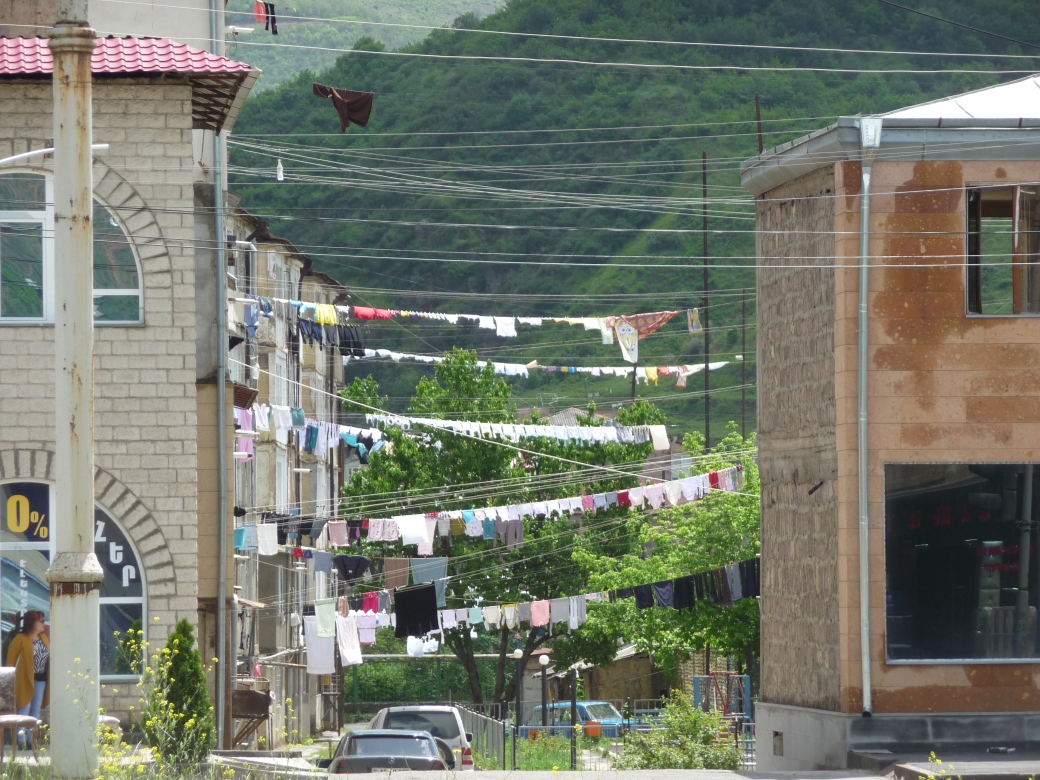 Along the way were some stark reminders of Soviet rule when bleak, grey concrete apartments were built by the hundreds.

In Yerevan, we stayed at the Boulevard Hotel. Location was excellent, the hot breakfasts set us up nicely for the day and we were in walking distance to most major sights as well as cafes, restaurants and shops. The staff here were brilliant.

Armenians are very proud of this famous landmark – Mt Ararat, resting place of Noah’s Ark. Unfortunately, Mt Ararat is no longer in Armenia. Instead, it lies just over the border in Turkey; the borders were redrawn in 1921.

Cascades showcases Armenia’s homage to the arts. We climbed the outside stairs to the top, then walked inside to the museum. Escalators took us down to each floor where sculptures and smaller museums gave us a good introduction to Armenian arts.

The view from top of Cascades to the Opera House. 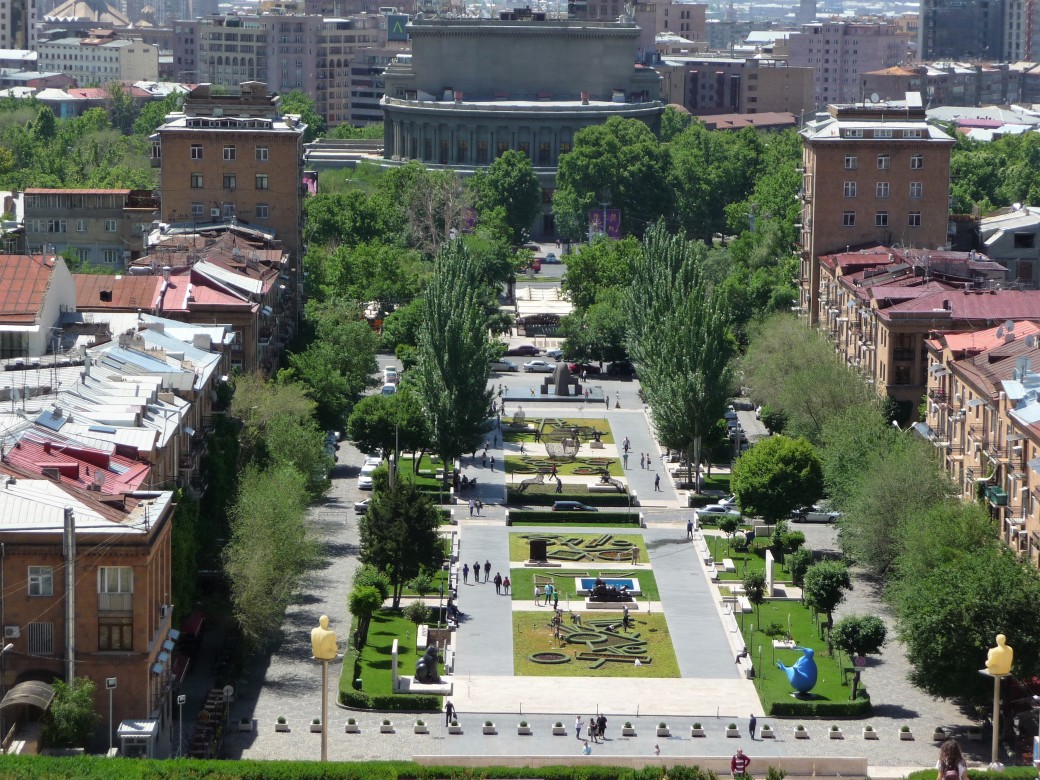 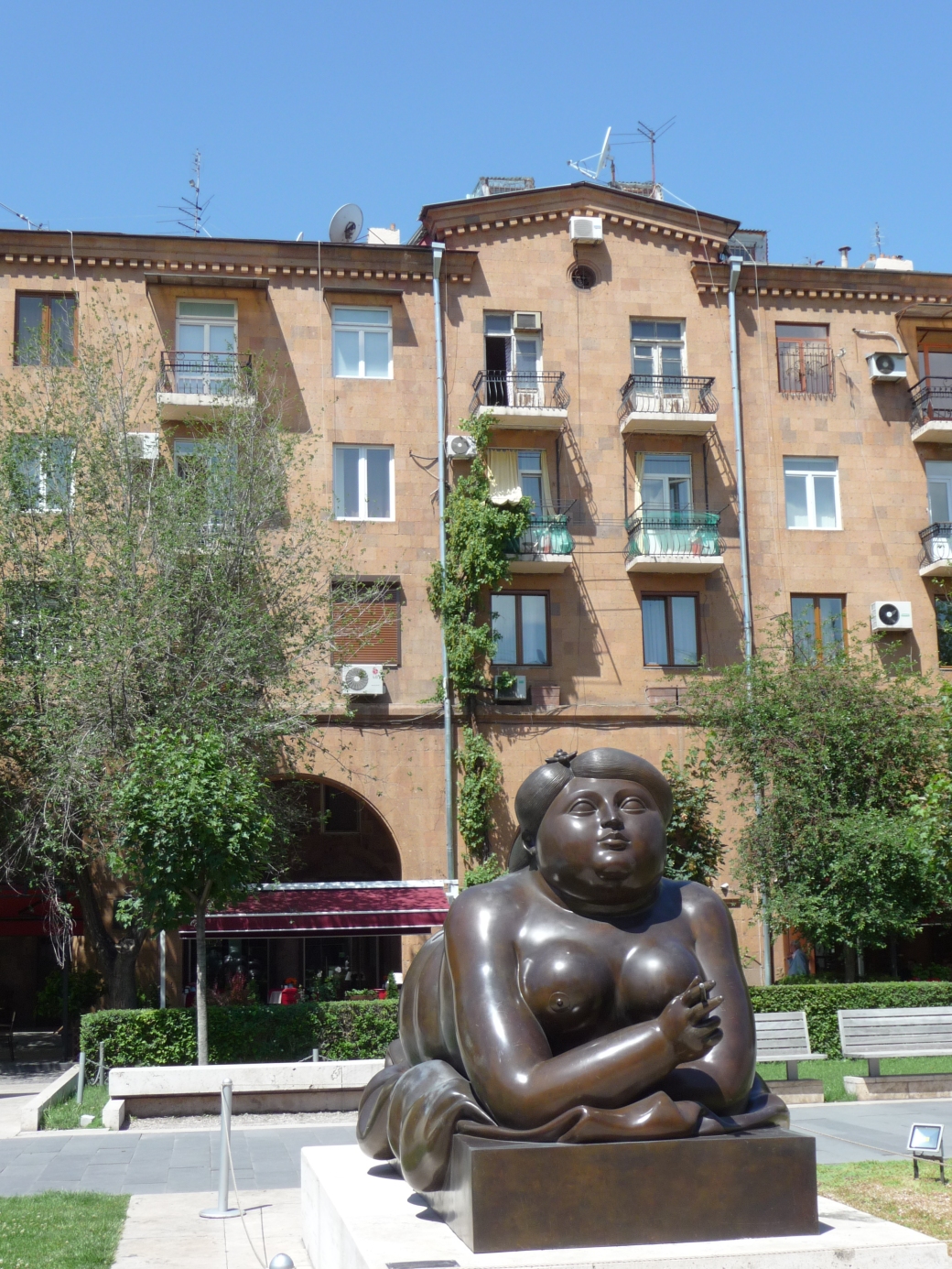 The Armenian National Academic Theatre of Opera and Ballet.

Republic Square was the scene of heated protests from thousands of Armenians a couple of weeks before our visit. Disenchantment with the current leader over corruption issues led many to support the opposition leader. Violence was avoided when a vote was taken in parliament here and the current leader, surprisingly, stepped aside for his opponent.

We were sitting in a cafe when the new leader, Nikol Pashinian walked past. He was surrounded by people who clapped and cheered. The young cafe staff ran outside to take photos. After, I spoke to one young staffer who told me, ‘Everybody likes him. He’s very popular. He will spend money on Armenians.’ Here’s to happier times.

Armenia’s National Museum with the light show at night – excellent.

Architecture on show at Republic Square.

We always eat out when we’re on holidays mainly because I don’t like cooking; also, it’s a wonderful opportunity to sample local fare. Armenian food is organic. Food is sourced locally and there is very little interference from farm to plate. Fruit, vegetables, milk and meat taste the way they should, so tomatoes, strawberries, mulberries, raspberries, cheese, goat, lamb, and wine did their job well and awakened our tastebuds.

Yerevan has a whopping 500 cafes, so it was always easy to find somewhere to eat. 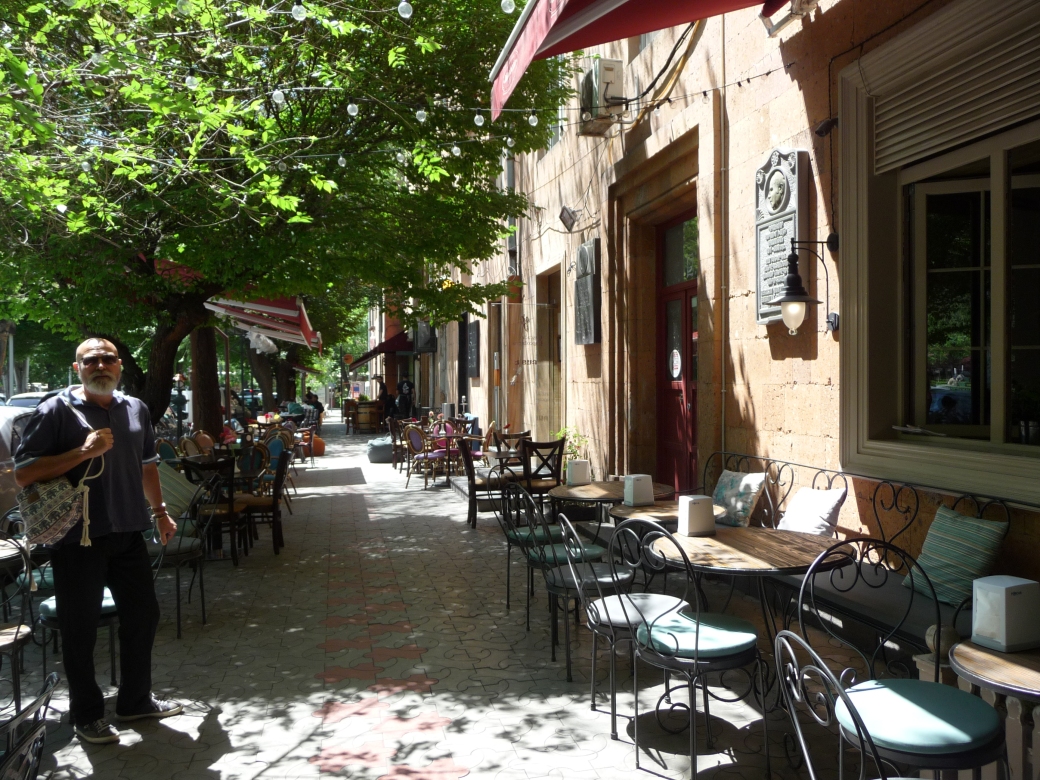 This photo shows an excellent Armenian beer and a sangria. However, I actually consumed some very good Armenian wine (organic of course) and I wish I had a photo or two to prove that!

Flowers were in full bloom in Yerevan.

The Armenian Genocide Museum was not as sober and bleak as I’d anticipated. Instead, it presented an excellent chronology of the appalling killing of a race carried out by the Ottoman Empire against the Armenians. The brutal annihilation of 1.5 million Armenians began on April 24 1915 with fit men being massacred. Later, women, children and the elderly were marched to the Syrian Desert to perish. Those who did not die left Armenia in a massive diaspora and settled in other parts of the world, even Australia. To this day, Turkey has denied responsibility for the genocide. 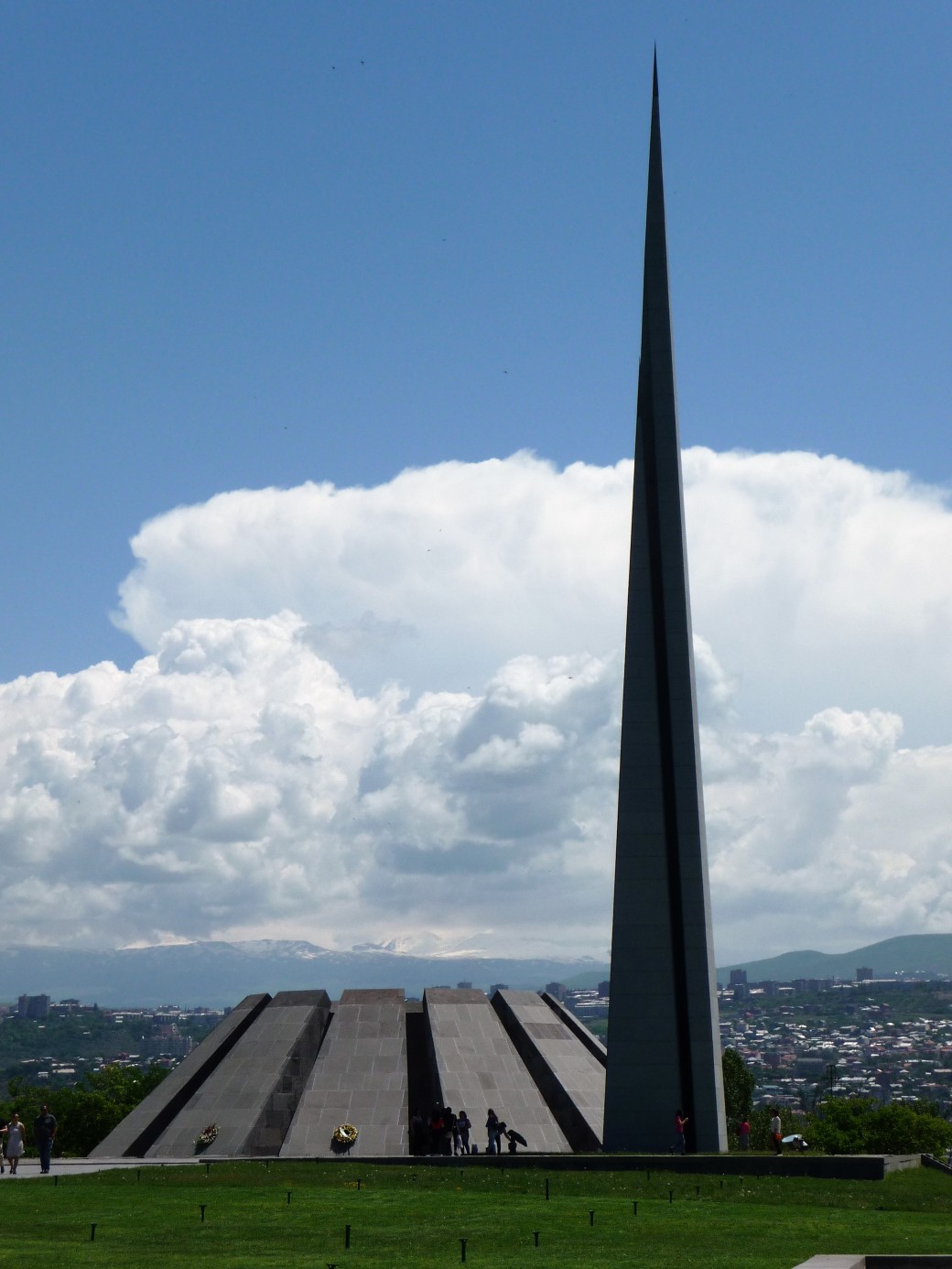 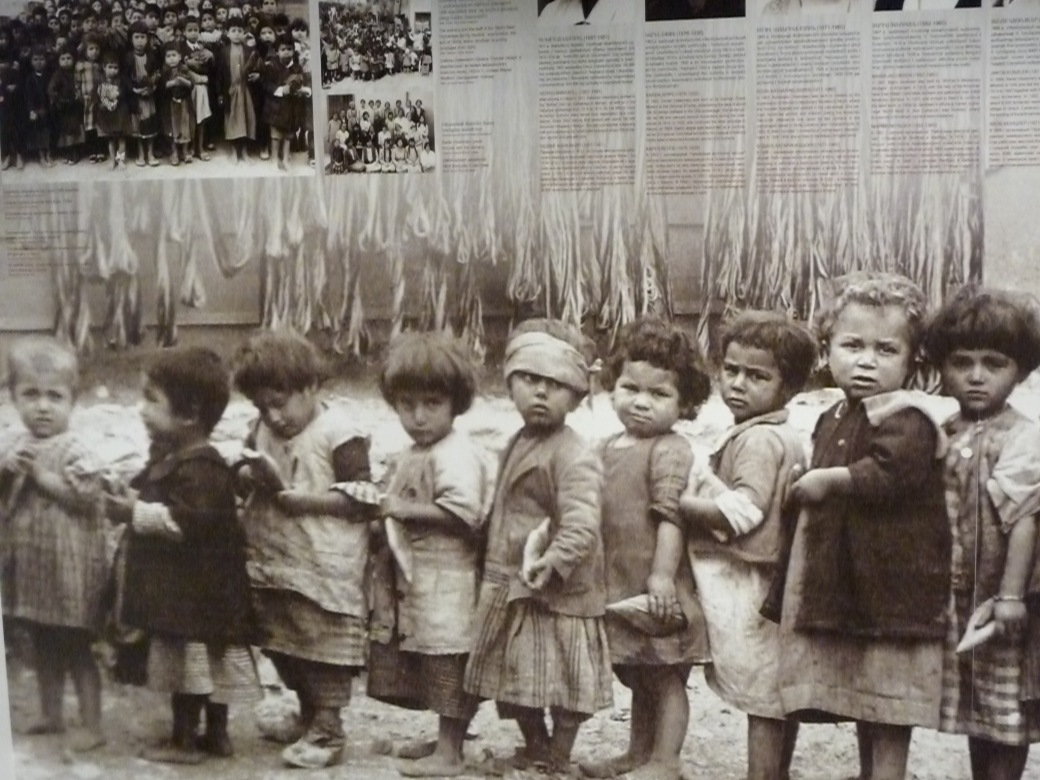 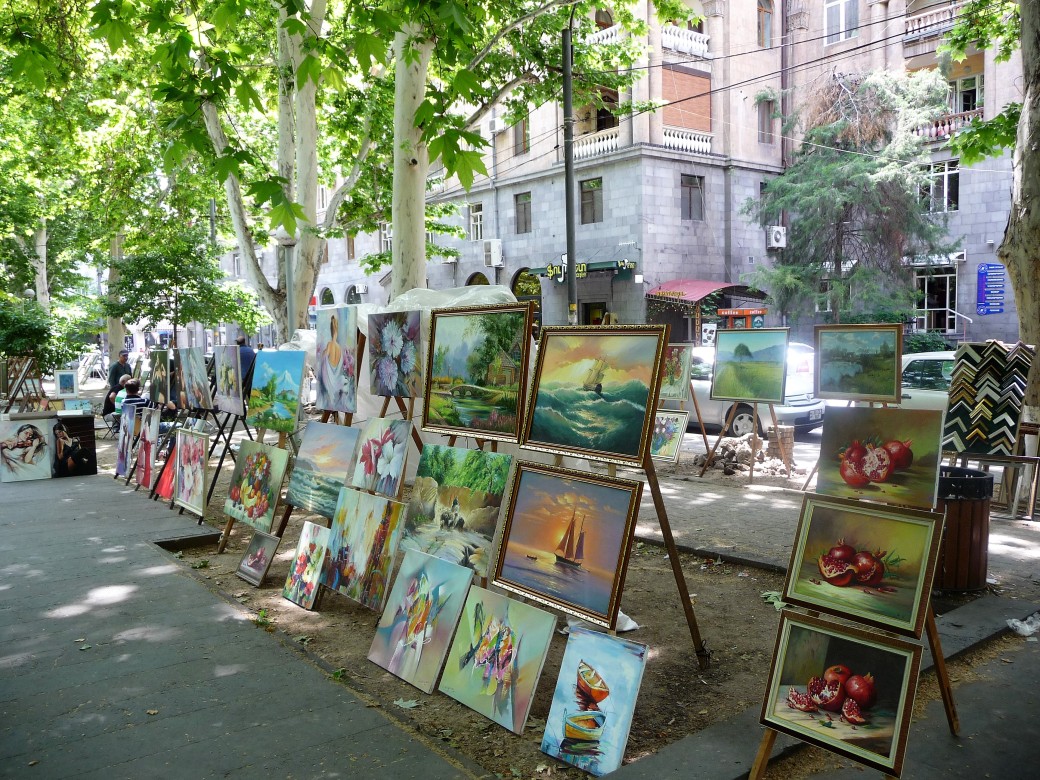 Stumbled across an Armenian cultural display and asked these two cuties in traditional dress if I could take their photo. They happily obliged.

Armenia is the world’s oldest Christian nation – since AD 301 in fact, and its people belong to the Apostolic Church. There are 4000 churches that tourists can visit. We visited just a few and found none of them replicated another. All were different and all offered incredible architecture and scenery.

The one below is UNESCO listed Garni Temple, an ancient pagan temple built in Greco – Roman style in the first century. 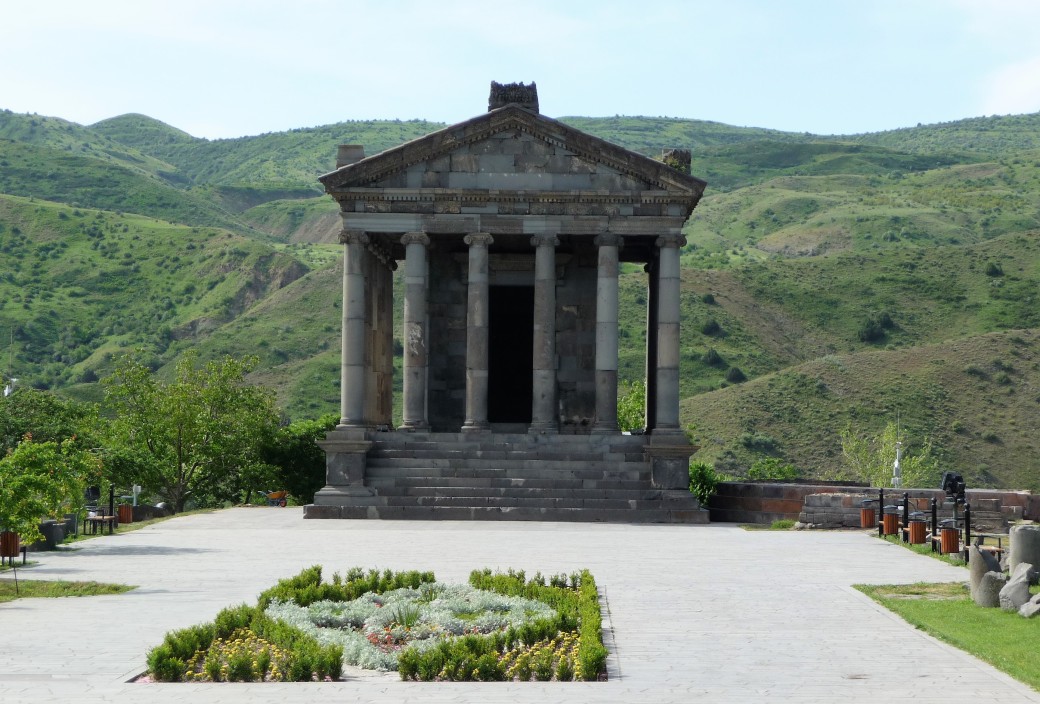 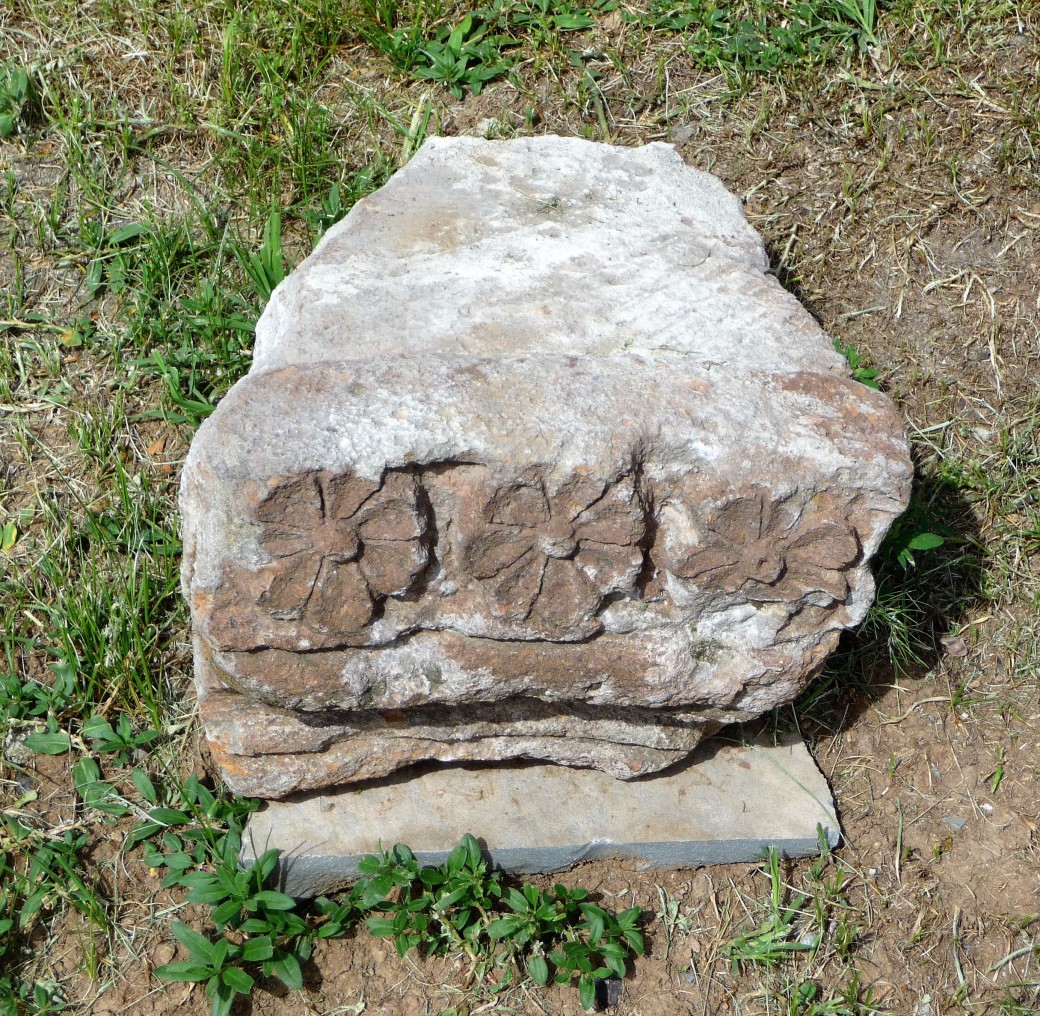 Outside the church, fox stoles are for sale – includes feet!

The church below is Sevanakvank, built in AD 874 and located on a peninsula at Lake Sevan. The views are beautiful.

Goshavank Church built in the 12th century is in picturesque surroundings.

Haghartsin is found in Dilijan National Park. The countryside is beautiful.

Geghard or Spear Monastery was built in 4th century. The story is that the monastery’s name refers to the spear used to pierce Christ to determine if he was still alive after his crucifixion. The spear relic no longer resides here, instead it’s in a church in Etchmiadzin.

Outside the church, these wily ladies tempted us to buy bread and walnuts in pomegranate juice. We gave into temptation.

Khor Virap Monastery near Mt Ararat was built in 7th century. Gregory the Illuminator was imprisoned here in the 6 metre deep dungeon for 13 years (and survived).

Some grafitti on the church wall

There’s a very strong sense of religion and history in this country and its people are more than happy for tourists to wander around, visiting the churches.

We heard many times that the Armenians’ strong religious faith has helped them cope with shocking tragedies like the 1915 genocide, the 1988 earthquake (50,000 killed), the 1999 coup d’etat where 8 parliamentarians were shot dead at the National Assembly and the current war with Azerbaijan.

I visited a hairdresser here in Yerevan and spent two hours chatting to a bubbly Armenian girl who told me that Armenians also did it tough in 1991 – the year Armenia broke away from the USSR. They did not have electricity for three years. Coal was burned in houses. Parents who had sons in the army had to pay for their uniforms and boots. And the list of hardships goes on. It certainly puts into perspective this quote I found at the Genocide Museum; ‘I come from bloody soil from an unexampled bloody history, from a people torn to pieces…’

Armenia attracts tourists, but it’s not the hordes of tourists that you come across in Europe. We found Yerevan an extremely easy city to navigate, we never had to contend with queues, we ate and drank well, we felt very safe. We drove on a lot of Armenian roads (Iran border to Yerevan, sightseeing to churches, Yerevan to Georgia border) and despite being narrow, twisted and bumpy, they are coping with tourist and local traffic at the moment. With more tourism and it’s certainly going to happen, the government will need to consider some upgrades.

We really enjoyed our brief stay in Armenia. Next stop is Tbilisi Georgia.

One thought on “Armenia: Meghri and Yerevan”