From Shiraz, we headed north west to Shushtar. Regular bus services ply the route to Ahvaz, then it’s a taxi ride to Shushtar. Ahvaz is dusty and industrial; petro chemical plants dominate the desert landscape. This area was heavily bombed by Iraq during the war 37 years ago when Iraq was determined to covet Iran’s rich petro chemical supplies. Towers spewing out red flames of gas can be seen from the road.

A rare sight in the desert – water.

Iran is rich in petrol and gas. Both are plentiful and cheap, and Iranians, we were told think it is their given right to use as much as they want. Unfortunately, the by product is pollution. The government has attempted to rein in this problem by increasing the cost of petrol, gas and electricity by a massive 1000%. Even so, petrol can still be bought for 50 cents a litre.

Like other bus journeys we’ve undertaken, a zillion taxi drivers meet the bus and bombard passengers (respectfully I must add) to secure a fare. We agreed to Fahardi’s price, soon realising that he was on a good wicket. His foot brake didn’t work, so he had to rely on the hand brake. We encountered a similar incident in Cambodia when our bus’s brakes malfunctioned. Certainly makes for an interesting ride. Anyway, Fahardi, a most interesting Arab made up for all that during the hour long trip from Ahvaz to Shustar by giving us a detailed history of the Arab conquest in AD 637 and Iran’s conversion to Islam. He also told us that Arabs are not fully accepted by Iranians and are often relegated to menial occupations. We certainly saw a lot of Arabs in this area of Iran, easily recognised by the black and white scarves on the men’s heads.

Fahardi (who happily posed for this pic) delivered us to our hotel, Shushtar Traditional Hotel, which was a good choice with its pleasant rooms, central location and never ending breakfasts.

We were in Shushtar to see three great sights: the famed hydraulic system, Choqa Zanbil Ziggurat and the ancient city of Susa.

The hydraulic system which was a short walk from our hotel is UNESCO listed and is as fabulous as the photos depict. It was built using Roman technology 1000 years ago and diverts water from the town’s river for irrigation. There are bridges, waterfalls, weirs, canals and tunnels. In addition, there are 36 water mills that milled wheat, rice and seeds. When you consider that people a millennium ago were constructively and imaginatively working with the desert landscape to provide water and food, it absolutely validates our journey to this part of Iran.

These two patient men spent time explaining the hydraulic system to us. 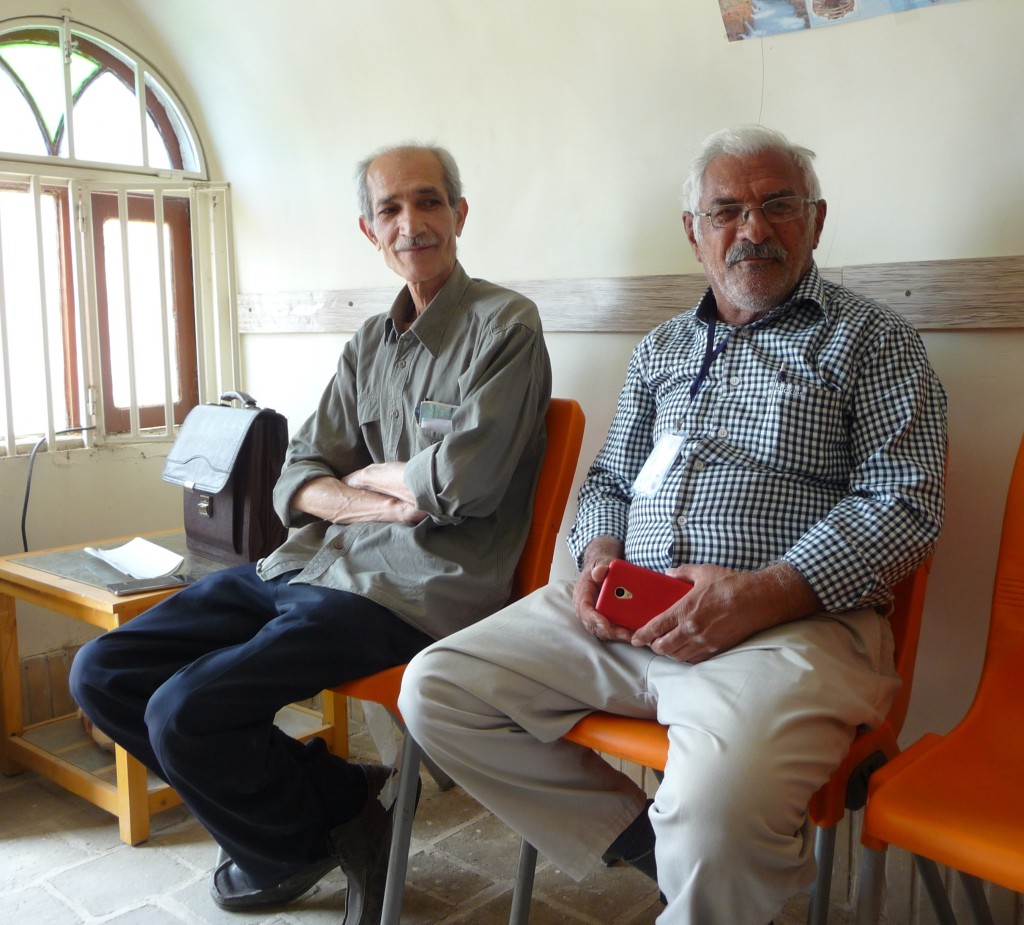 We hired a driver to see Choqa Zanbil Ziggurat. The Ziggurat temple is pyramid shaped with tiers and was built in 13th century BC. Few ziggurats are seen outside Sumer (today’s Southern Iraq), so we were rapt to visit this one. It’s amazing not only for its red brick structure, but because it was ‘lost’ for 2500 years until 1935 when it was accidentally discovered. It is in excellent condition; the bricks look new. There’s still more work to do though to restore it to its original shape. 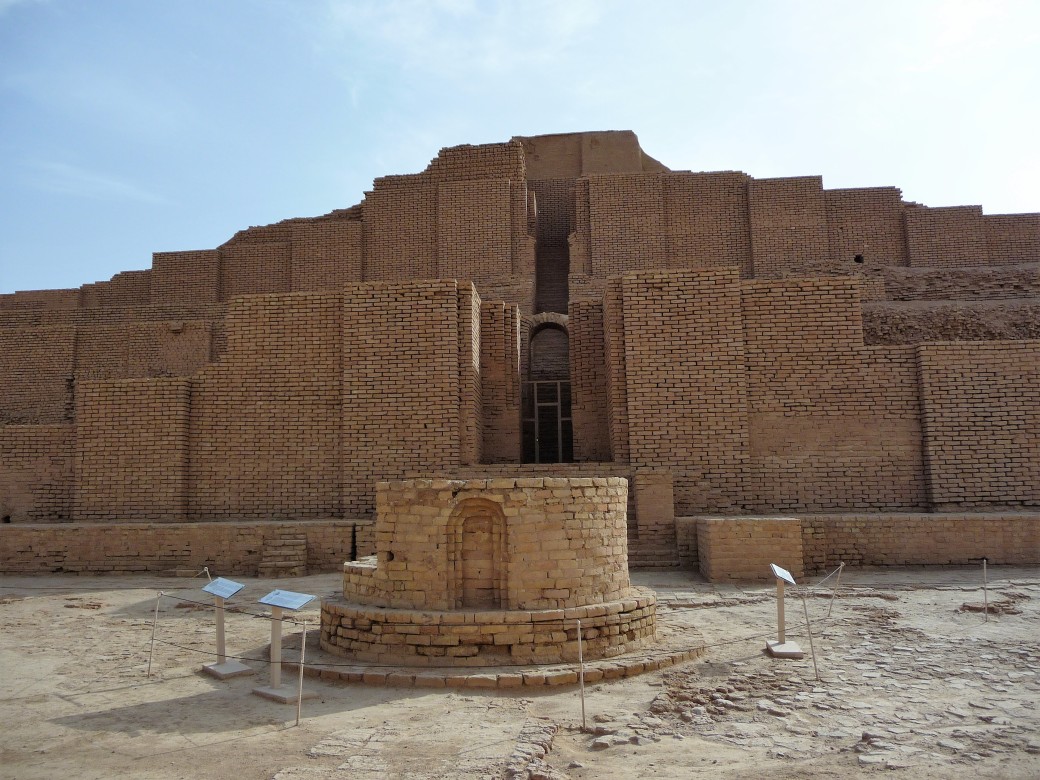 Spied these camels near the Ziggurat.

Susa near the town of Shush was a great city in 521 BC when Darius I built it as his winter capital. It is considered as grand as Persepolis with halls framed by 22m high columns. There’s little remaining today except the mud brick bases of the buildings, but you get an excellent idea of its immense size.

Shush Castle, built by the French in the early 1900s is close by. The French were allowed to excavate the site and the treasures they uncovered were stored in the fortified castle. Later, these treasures made their way to France and today are exhibited at the Louvre. So many great pieces from so many countries lie in museums around the world, thousands of kilometres from their rightful homes – right or wrong – not sure on this one!

Nearby Susa Museum has some interesting pieces gathered from Susa.

The Tomb of Daniel, claimed to be the biblical prophet’s last resting place 1000 years ago is found in town. The cone in the photo below pinpoints the spot. Visitors are allowed inside to view the tomb. Women must wear a chador which is available at the front. Men and women have separate entrances. Inside, the tomb is surrounded by a wire grate and devout Muslims kiss the grate, their agony quite visible.

This restaurant with its pleasant outdoor area was a good choice – kebab, lamb stew and saffron drinks.

The restaurant looks out over this ancient bridge.

Met some friendly locals who were amused when they found out we hailed from the land down under! 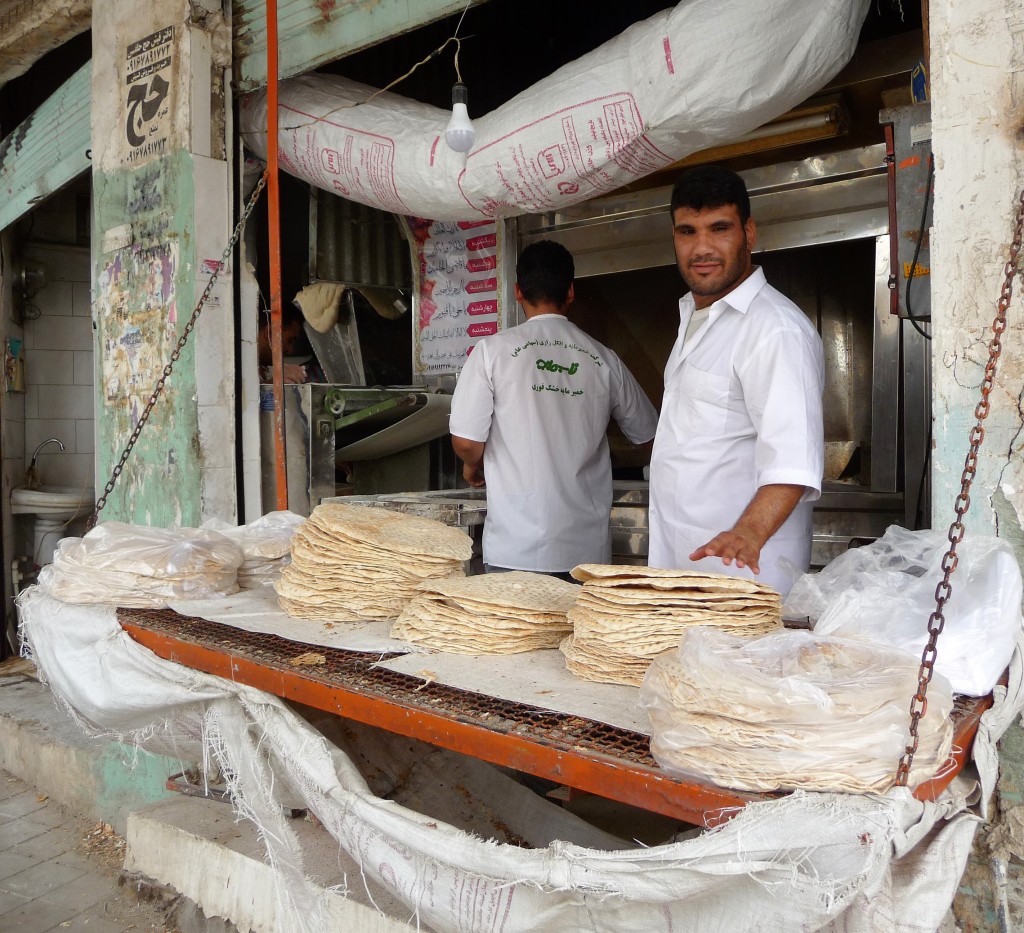 Even in Shushtar, you can find good coffee.

We spent 3 days in Shushtar, then departed by train for Dorud. The train track cuts through the Zagros Mountains and is quite spectacular. A number of villages and tunnels lie along the way and in true train travel fashion, we got to meet some interesting Iranians over the 6 hour journey. 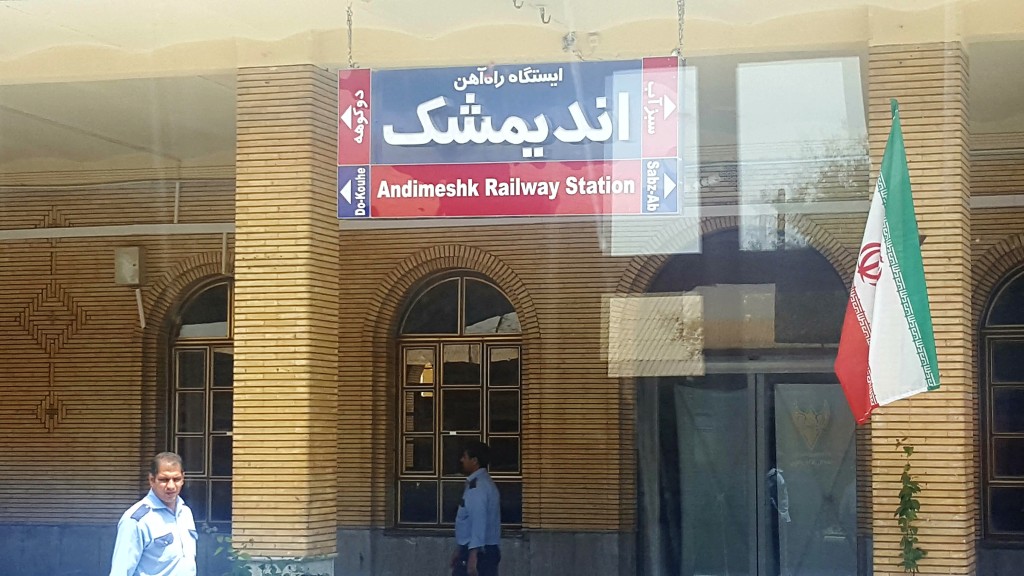 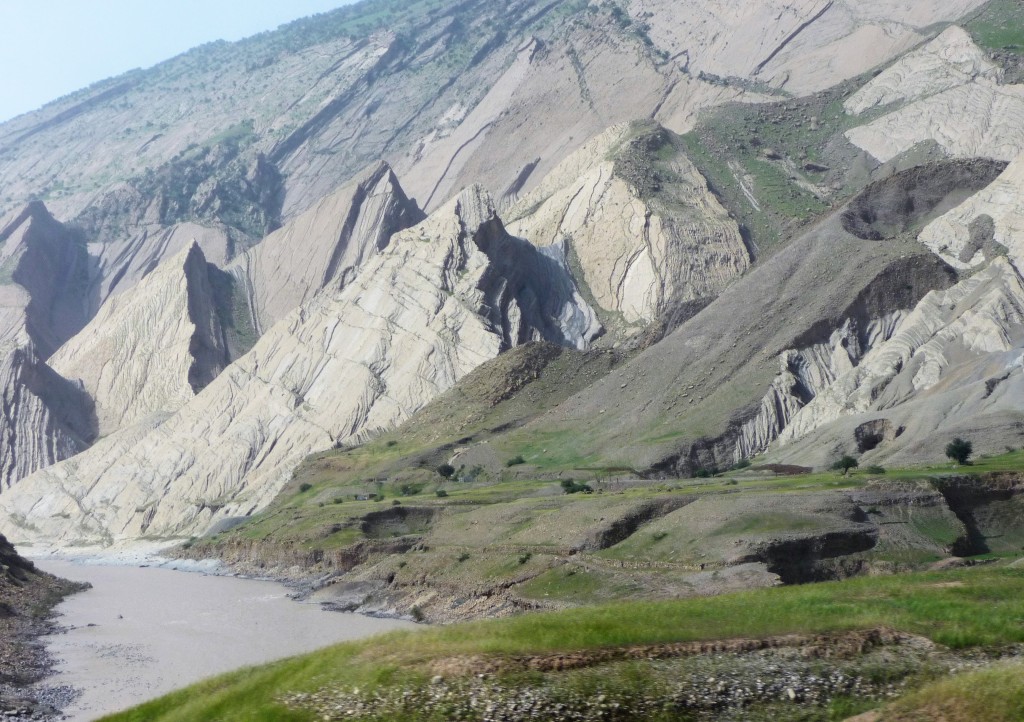 Dorud was a one night stopover. Our hotel which will remain unnamed was a definite no star – yuk. If you can, book in early to the one recommended in Lonely Planet. We left our run too late and hence had to cop this one on the chin. However, things brightened up when we hit the street and people directed us to an amazing little family run restaurant which served up great kebabs on home made bread as well as some good chay. The kids made a fuss of serving us, hanging around the table to listen to us talking.

Next stop is the Caspian Sea – time to swap the desert for some green!